Gus Gracey, the artist, my brother 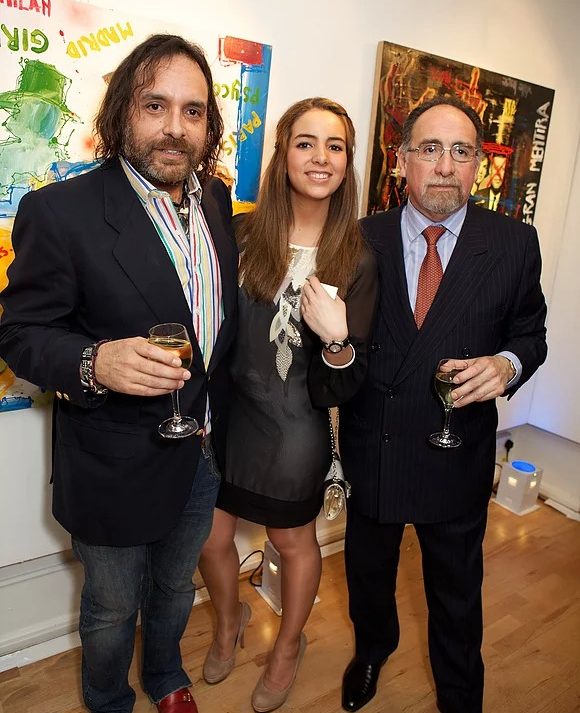 Gus Gracey is a versatile and cosmopolitan artist. Born in Lima, he has lived in Madrid for most of his life and after two years in London, where he consolidated his career as a multi-media artist, he returned to Madrid in order to gain a different perspective through a return to his base and roots. He is now preparing a new phase in his creative cycle that will see him go back to London and then to New York, to further his experiences and impressions, and therefore his artistic genesis.

From his beginnings in Poetry and Literature, in a constant almost obsessive search of new media, he found Painting and embraced it with a unique and refreshing style, using all sorts of materials to express his endless creativity. Lima, his home town, with its original mixture of spanish origins and ancestral and native gods, with its new and different flavours and colours, is the basic canvas over which he keeps adding other colours, sounds and experiences, that find in his Art a powerful and splendid way of expression. Madrid, with its clear and luminous skies that once inspired Velázquez and Goya, is an exciting contrast that opens the ever present melancholy of Lima and transforms it into an exhuberant song to life. London, the Cosmopolis par excellence, opens a fantastic array of opportunities in his daily contact with other people, artists, cultures from all over the World. Traditional canvasses are soon replaced by cardboards, wooden doors and even pallets, passing through photography, videos and drawings with his mobile phone, as anchors and stepping stones for a very personal interpretation of every day reality that through his enormous artistic talent, he projects and reaches the sensibility of a World that beyond its apparent differences and variety, he unites in harmony.

Gus Gracey is a profound and analytic observer of Reality, which he shows us in his work by telling personal stories in a unique way, very much differentiated from all the current schools, tendencies and fashion, even techniques. He could be defined as a figurative expressionist or as a liberal impressionist, at the same time, but that would be reducing and limiting his style, nature and character, enormously. His themes and contents and the vitalist, colourful, exhuberant, humorous, carefree, honest, sometimes brutal but always sincere and beautiful designs in which he expresses himself, are the way he uses to reach the Universal. Heobserves the ephemeral and transforms it, for us, into the eternal.

A unique aspect of all his work is that he has articulated it, he has composed it, as a symphony to Life and Women. He is also an Iconoclast, a Rebel that offers his vision, sometimes blunt and crude, others intensely passionate, but always direct, beautiful and completely independent, expressing feelings and perceptions in a deceitfully simple and straightforward way.

His paintings and his photos and his poems and drawings, are chapters of a novel in permanent expansion, homage to the women and people he has met and the unexpected circumstances that his own life and daemons dictate. Each painting is therefore a verse or a paragraph of the chapters of the integrated work  that he produces everyday, his life. Facebook was for quite sometime for him, actually he was a pioneer of it, his main platform to communicate with the outside world and his followers, who read his page as an online book, constantly in the making. He has now chosen other vehicles to contact them, in his constant search for the new and the untrodden paths of expression and communication.

His first Exhibition in Mayfair, the heart of the Art Capital of the World, London, was promoted and organized by Maddy Crewe-Read, a brilliant and young Art promoter and it was a huge success and an unforgettable party. Interestingly, several of the Artists that had exhibitions in the area at the time, exchanged works with him in a very significant and welcoming gesture to his personality and his paintings. Other exhibitions followed i London and Gus added to them, his friend Peter Parker and his Rock & Roll Band, playing music live and giving the events an integrated, happy, musical as well as artistical, celebration, This comes naturally to Gus, since he is a Dionysian artist that, as said before sings women, horses, beauty, sex and passion, whose zest for life transforms the quotidian into a party and a celebration and the apparently grey into an explosion of colours, impressions and intense feelings. You can find in his works reminiscenses to Picasso and Freud, sometimes to Baskiat and even Goya, but then you realize he is different and unique. You may like some of his works, others may shock you, but he will not leave you indifferent.

Back in Madrid, he chose to seclude himself for a while, and begin a period of introspection. He developed a new phase in his creativity looking for inspiration in the contemplation of the most profound and hidden spaces of his own soul, heart and spirit. An amazingly productive cycle ensued, completely different from his previous works.

Being based in Tetuan, a trendy and artistic neighbourhood, in Madrid, the Úrculo Foundation and Museum, dedicated a month long Exhibition to his work, in October 2013, which was an outstanding success. The “From London to Madrid, a retrospective”, exhibition, was presented by Madrid´s Mayor, Ms. Ana Botella and the Foundation has kept two of Gus´works in their permanent Collection. In 2014 another month long Exhibition will take place, showing some of his more recent works.

In these times of mass production, of artists that seem assembled in the same factory, terribly monotonous, politically correct and serial, impeccably schooled, that have as their main references Damien Hirst or the “diktats” of the powerful and castrating Establishment, Gus Gracey, an Iconoclast, a rebel that offers his vision, blunt and crude, intensely passionate but always enormously talented, beautiful and unique, with his expression of complex feelings and perceptions in a deceitfully simple and straightforward way, gives us back the sheer joy and passion for Art with capital letters, free, magnificent, explicit, unabashed and profoundly human. 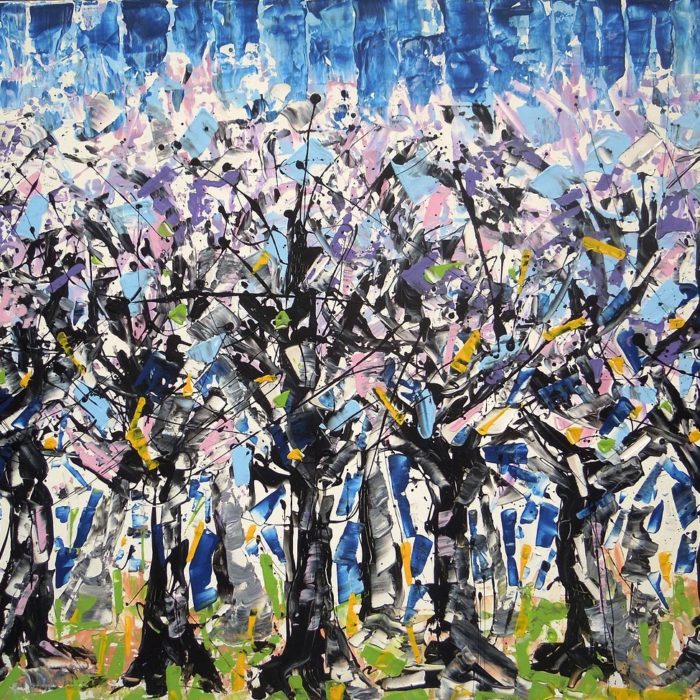 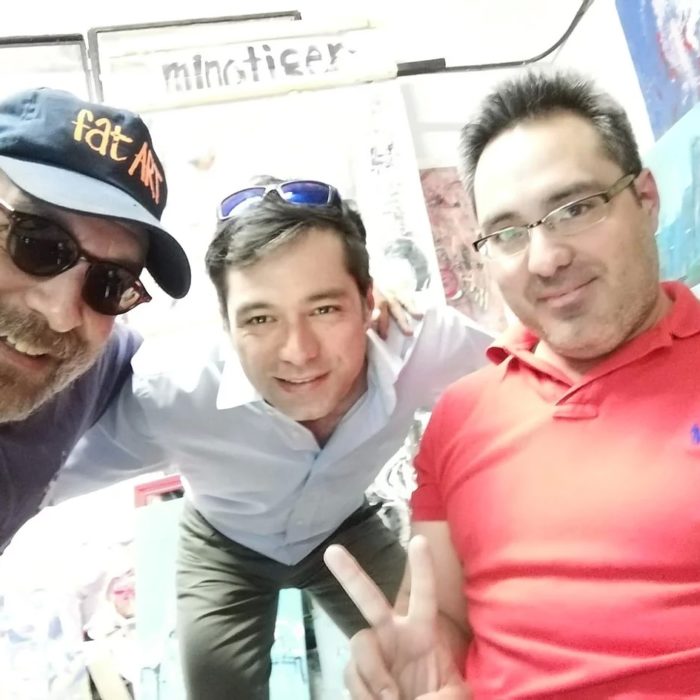 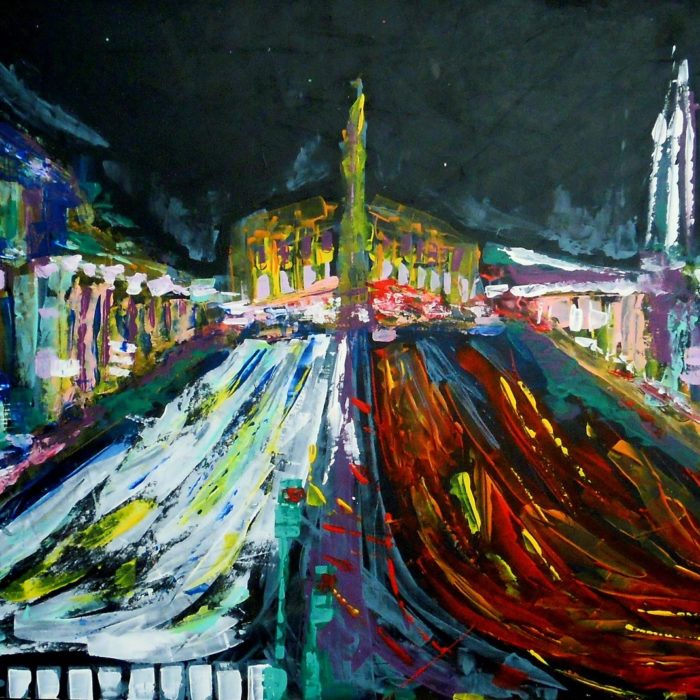